We don't wait for new innovations, we engineer them. From concept to commissioning. 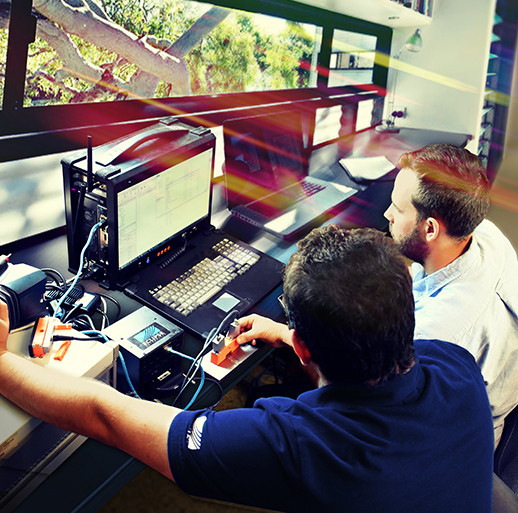 The Research and Applications Development group is composed of researchers with expertise in:

Services offered by the Research and Applications Development team include:

We developed an inspection system based on Full Matrix capture data acquisition and Total Focusing Method (TFM) imaging algorithm for volumetric inspection of the fillet welds, detection of lack of fusion and quantifying/sizing disboning on the weld fusion face.

Research and Applications Development in partnership with Acruen Nuclear Services, designed a tooling for phased array inspection of tube welds. The scope of work included:

Development of Phased Array Inspection system for Weld Inspection and corrosion mapping at Elevated Temperatures up to 350 Celsius. 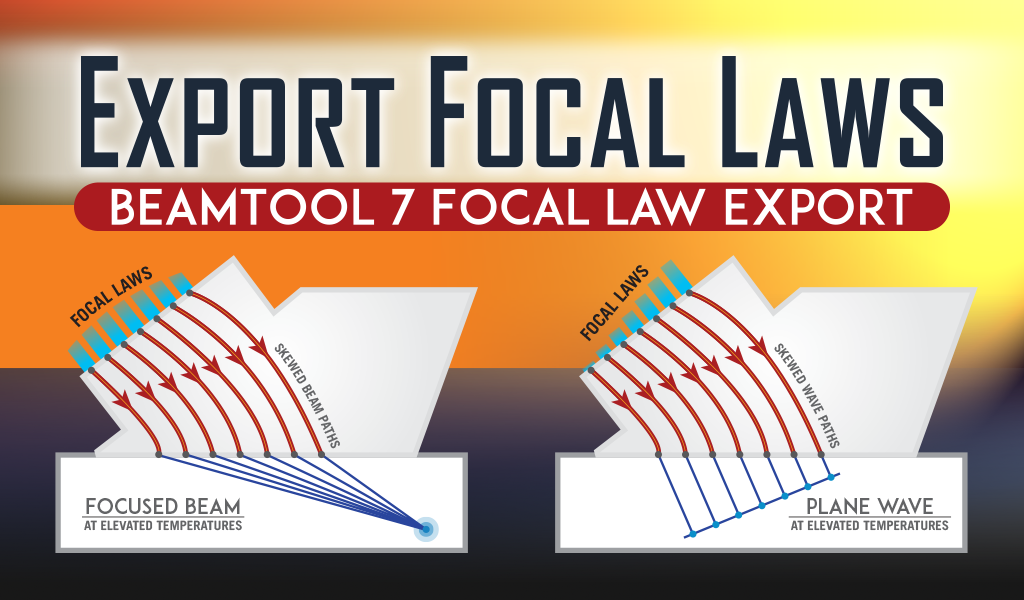 We recently concluded a project in which the first 10 mm of a forged component was to be inspected for small de-laminations (~ 0.5 mm). Using a combination of high frequency, highly focused linear scans as well as relatively low frequency Rayleigh wave inspection, full coverage of the inspection range was demonstrated. Machined targets as small as 0.5 mm in a range of 1-10 mm from the component’s surface were repeatably detected using the proposed PAUT technique, while targets as small as 0.5 mm in the first 3 mm from the surface were reliably detected using Rayleigh wave inspection. A 1 mm target located 2 mm below the component’s surface, detected by both the PAUT and Rayleigh wave techniques is shown in the figure below.

The technique was developed using an OmniScan MX 1, off the shelf probes and a custom profiled wedge which was designed and manufactured by the Research and Applications Development group.

In addition to ongoing funded research projects, the Research and Applications Development group is also developing new technologies/techniques aimed at solving some of the most challenging inspection problems in the NDT industry as identified by Acuren’s subject matter experts. Our current research initiatives include:

Full matrix capture inspection is increasingly deployed in situations where high resolution scans offer benefits for detection and sizing of small defects. In particular, TFM images have been found to provide quantitative information regarding the progression of high temperature hydrogen attack (HTHA) at room temperature. Since HTHA is commonly found in reactors operating at elevated temperatures, there exists considerable interest in running FMC scans at temperatures above 200 Celsius. Having previously developed high temperature wedges/scanners for PAUT inspections, the Research and Applications Development group is now investigating the potential of adapting these systems to FMC based inspections. Initial scans indicate that without applying any modifications to the TFM algorithm to compensate for temperature induced velocity gradients in the wedge and piece, FMC scans can be performed up to around 300 C with only minor distortions in the target images, as shown in the images below:

It is noted that the background noise increases considerably at high temperatures, that may interfere with the detection of HTHA which manifests as elevated material noise. The increase in background noise is likely caused by localized flashing of the high temperature couplant layer. Consequently, the team is looking into alternative coupling mechanisms capable of delivering better scan quality at very high temperatures. In addition, the team is working on modifying the delay calculations required for applying the TFM algorithm in the presence of a wedge velocity gradient using travel-time tomography. The end goal is to have a fully functional FMC/TFM system which can be deployed to obtain high resolution images of components at temperatures up to 350 C.

In an effort to strike a balance between the improved resolution achievable with FMC/TFM and the cost effectiveness/scanning speed/deployability of traditional phased array systems, we have been working to develop custom focal laws which produce highly focused images of narrow regions of interest. These laws can be imported into common phased array acquisition units. This approach has been found to be very promising for two particular applications: monitoring/sizing of weld root erosion and depth estimation of stress corrosion cracking (SCC).

For the case of weld root erosion monitoring a pitch/catch PAUT arrangement is used with focal laws designed to focus shear waves along the nominal centerline of the weld, which allows regions of root erosion to be easily detected and the extent of erosion readily estimated, as seen in the figure below.

A similar focal law has been used in an attempt to focus shear waves along the face of surface breaking cracks, with the ultimate goal of estimating the extent of SCC cracks (as shown in the figure below).

Using a 3D printed inspection jig (made in house), the technique has been used to accurately size surface breaking notches, as shown in the image below:

The way that the resulting focal law is plotted in standard PAUT analysis software (Zetec’s Ultravision Software) shows the vertical extent of the notches along the horizontal axis. Further work is underway to determine the precise sizing accuracy of the proposed technique. In addition, the possibility of including a second group using a different focal law which involves another backwall skip is being investigated by the Research and Applications Development group.

FMC/TFM technology provides ultrasonic images with much higher resolution as compared to standard phased array images. Accordingly, FMC/TFM offers clear benefits in terms of flaw interpretation and sizing. FMC/TFM based inspections have 3 major limitations: 1. processing speed, 2. storage requirements and 3. limited pulsing energy (only a single element is used at a time in transmission). All of these shortcomings can limit the practical inspection range, which is particularly problematic as FMC/TFM is becoming commonly used for HTHA inspections of thick reactor walls. The Research and Applications Development group has developed a novel algorithm which processes standard phased array sectorial sweeps into high resolution images which rival those obtained by applying the TFM to FMC data. The following images compare the resolution of angled holes on a Harfang block obtained using FMC/TFM and the advanced PAUT processing algorithm (2 groups of 32 elements used in the sectorial sweep, +/- 60 degrees, 1 degree increment).

A major advantage of the proposed algorithm is that it can be run using standard acquisition units (OmniScan, Topaz, etc.). In addition, scan files are only slightly larger than for a typical PAUT sweep which allows for the possibility of rendering the higher resolution images live for large inspection ranges (data transfer and rendering algorithm can be fast enough). In addition, the fact that a large aperture is used in transmission allows more energy to be generated in the piece, which can help penetrate deeper, specifically in noisy materials.

Many defect types do not reflect ultrasound with appreciable energy and thus cannot be imaged using traditional UT techniques. Such types of defects, which can be microstructural in nature can manifest as inhomogeneity in the ultrasonic attenuation (or the frequency dependence thereof) within a component. The Research and Applications Development group has developed a technique capable of mapping subtle changes in attenuation to produce cross-sectional images of pieces suspected of localized microstructural damage. The technique is a straightforward adaptation of computed tomography (CT) scanning, commonly used in medical ultrasound to image soft tissue, where projection data are instead obtained by looking at the back-wall response between element pairs on a phased array probe (operating in Full Matrix Capture mode) with respect to a healthy reference sample. The technique has been used successfully to image small clusters of microporosity (10 micron pores) introduced into a small aluminium sample, as shown below.

The hope is that this technique will prove effective for imaging other types of microstructural damage such as HTHA and early stage creep, as well as other types of non-reflecting defects, such as poor fusion of plastic pipe welds and defects in friction stir welds. Additionally, this technique has been found to be a promising new approach for imaging/sizing surface connected cracks. The image below shows the ability of attenuation tomography to accurately size, tight, surface connected notches.

An obvious application for surface connected crack sizing is the depth estimation of SCC crack colonies, which the Research and Applications Development group is actively investigating at the present moment.

Currently no commonly accepted technique exists for inspecting fillet welds for lack of fusion or volumetric defects. To that end, we have developed a technique which uses wedges made of flexible polymers to scan directly through the weld cap, focusing along the nominal fusion face or the center of the weld volume, depending on what type of weld defect is to be inspected. Coupling is achieved using a thin ethanol film which when pressed between the weld cap and the flexible wedge material achieves acceptable acoustic transmission. The following image shows the detection of incomplete weld penetration and crack like defects found in a FlawTech T-weld sample.

Further work is currently underway to establish and evaluate an appropriate sizing technique. 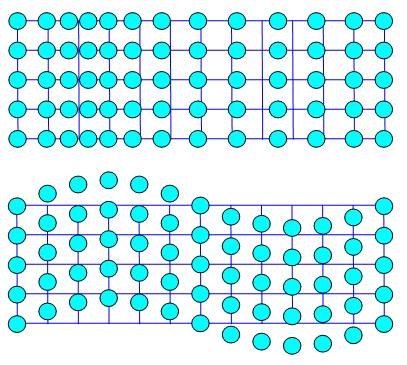